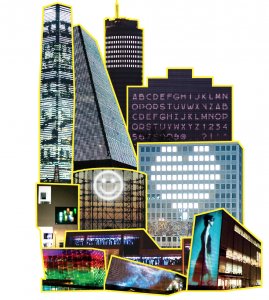 Connecting Cities Network (2012-16) is a globally networked action research platform and practice field initiated by Susa Pop, Public Art Lab in cooperation with 11 partners and co-funded by the European Union / Creative Europe Programme. Its investigation departs from the urgent question ‘what is the socio-cultural and translocal potential of commercially used urban screens?’ One of the main goals of the network is to ‘reclaim the screens’ and to redefine and explore the function of urban screens and urban media art environments as hybrid places of shared encounters and visulaisation zones in critical reflection on the worldwide presence of large-format digital media infrastructures and the commercialization of urban environments.

Between 2012 and 2016, the Connecting Cities Network set up a worldwide network of 45 cities and institutions which tested and explored the communicative potential of different urban media environments through three curatorial strands and city visions:
The Networked City which investigates new forms of networkedness and fosters translocal exchange by opening real-time windows between cities and connecting local audiences beyond physical borders.
The Participatory City which explores urban media environments as collaborative platforms to engage citizens in decision-making, debate and public actions around issues relevant to public space.
The In/Visible City which addresses issues of surveillance and questions the model of the ‘smart city’ by sensing hidden realities in urban space and making them visible to wider publics through artistic scenarios.

Connecting Cities builds up a connected infrastructure of media facades, urban screens and projection sites to circulate artistic and social content. In opposition to the commercial use of these urban media, CC establishes them as platforms on which citizens can exchange – within the city as much as between cities.