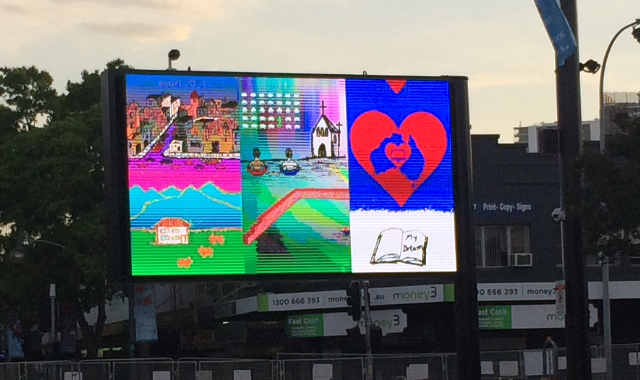 Migration Triptychs is participatory digital storytelling developed with refugees from Iraq currently living in Liverpool, Sydney, Australia, and exhibited at the urban screen at the local pedestrian mall.

This project aimed at capturing three stages of rebirth by telling the stories of residents from the Liverpool City Council who came to Australia seeking asylum from conflicts in Iraq. The stories are captured as “digital triptychs”: digital animations with graphics, audio and written words, played on three sections: (a) life before coming to Australia, on the left-hand side partition; (b) the journey between lands, at the centre; and (c) life in Australia, on the right-hand side partition.

The design of the triptychs followed a consultation process by Dr Luke Hespanhol with members of the community, supported by the Western Sydney Migrant Resource Centre (WSMRC) and part of an arts residency with the Liverpool City Council from June to September 2018. The entire content of each triptych was developed in collaboration with the participants themselves. The resulting animations were originally played at the urban screen at Macquarie Mall, Liverpool, New South Wales, during the Visions of Peace urban festival in November 2018, highlights the nature of Western Sydney as cultural crossroads and welcoming place for people of all walks of life.