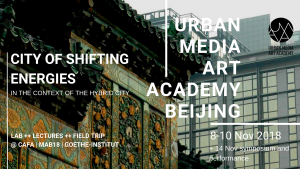 The Urban Media Art Academy 2018 program addresses a contemporary condition in Beijing characterized by rapidly shifting and philosophically contradicting energies that progress the hybrid city. Changing city plans up through the twentieth century with transition from a planned economy to a market economy, today progressing with development of high-tech industries and rapid urban growth, have shaped an urban atmosphere of growth and rationalization. Different philosophies of energies have accompanied the city’s development: Old Beijing was built up around ‘acupuncture points’ or nodes of energy, the transition to a market economy has been driven by rationalizing energies, and material thinking post the cultural revolution is informed by simultaneous economic dynamics and ancient philosophies of material energy (气 or Qi). Energies distributed from different philosophies and historical phases of the city take up the air, atmosphere and heartbeat of the city, and their negotiation determine the future conditions of living for citizens in Beijing.

With this academy program we will examine how media art in the context of Beijing can intervene in and negotiate the city’s spaces of shifting energies: What can urban media art do as a mean of intervention among shifting energies (from ancient to historical and hi-tech) in Beijing, and how may art contribute to negotiating Beijing’s urban futures?

The program will combine learning on urban media art histories, urban theory, curatorial inquiries and criticality as well as ‘knowledge from the field’ via conversations with professionals. It will introduce participants to methods of artistic research, concept development and artwork proposals for creative city making.

Since ancient civilizations, art has participated spiritually, conceptually and materially in city-making – building up societies and architectural structures as frescos, reliefs, painting, glass, etc. Today, cities around the world are being upgraded, augmented, and made artificially intelligent with technology at a pace not accounting for environmental consequences of our human-made innovations. In this context, the attention to securing the participation of art and art’s inquiry as part of the foundation on which our future societies will be built evokes a need for including ethics and holistic consciousness at the human scale in our fast-paced process of urban change.

The symposium positions urban media art as a matter of global response to current urban urgencies; as an interdisciplinary and inter-knowledge domain of practice and theory – asking:

How can urban media art contribute to ‘shifting’ matters and energies of fast-developing hybrid cities, towards ethical and sustainable ends? What modes of consciousness in the art (skills, concerns, discourses and qualities) do we need to further (and teach) in order to engage with current urgencies of cities and societies – in a global perspective.

From the Beijing program you will:

After the program all participants will submit a text (max 600-800 words) in English, which will present your analysis and perspective on Beijing as a context for urban media art. Your answer to the question posed in the call for this academy: What can urban media art do for Beijing? was an initial exercise for this text, and you may want to build on your reflections submitted here.

Your illustrated text should address the following:

After feedback and evaluation (pass/no pass) based on the above guidelines and demonstration of the acquired learning goals, your texts will be edited and combined in an UMAA report on Beijing summing up our investigations and findings during this program.

The program is free and open to students, artists, designers, architects, creatives, city-makers, architects and others with interest in urban media art and what it can do for the city of Beijing. Registered participants will receive a certificate upon completion.

The program is free for participation and open access, but please register/apply for certificate and access to future programs. Registration is open until October 22, 2018, or until full (20 participants). Confirmation on registered participation´s date to be confirmed .

The Urban Media Art Academy is founded in collaboration with the Goethe-Institut Thailand. Further founding and networking partners are the Connecting Cities Network and the Media Architecture Institute. UMAA is co-funded in the framework of Future DiverCities and the European Union, Creative Europe Program.

More info about the project: www.publicartlab-berlin.de/?p=3235